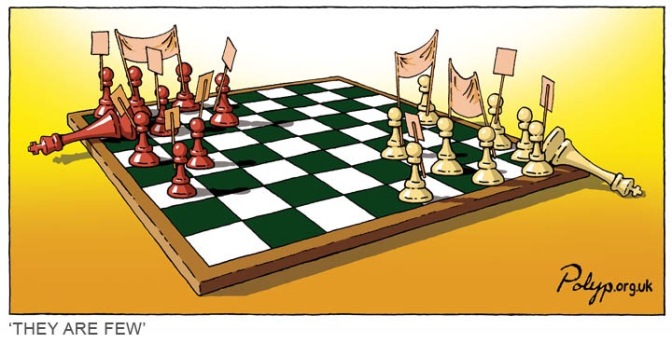 This is a post that is a response to Julians Post on Monday here. Image is from the wonderful Polyp. You can visit his website here

Artificial Intelligence has long been a staple of science fiction, its the dream of creating a computer that is able to reason, emote, rationalise, manipulate and plan as a human would. The trap that is easy to fall in to is to assume that this computer would be a super human. While it may be able to harness very large quantities of data, beyond even our own capabilities, that is not a prerequisite for AI. They only need to match us, to be our equal, to be indistinguishable.

Recently the genre has been rejuvenated, once by the Channel 4 drama ‘Humans’ currently showing on Sunday nights and alternatively by the critically acclaimed film Ex Mechina (out on DVD now). The reason I bring this up is to follow up on Julians post on Monday. He questioned what it means to be human and whether the self can be detached from the things we do or think.

In the film Ex Mechina the machine in question ‘Ava” is undergoing tests to judge whether she is fit to be declared as AI, this is known as The Turing Test. In one particular scene this testing process is scrutinised with the line. “How do you test a chess computer other than playing it at chess? Sure it can play but does the chess computer know what chess is?” The fact that Ava is a machine is irrelevant, in the story us and her are functionally the same, but can we ask ourselves the same fundamental question? Do we know what life is?

Obviously I’m not going to comprehensively answer that question here. Its an extension of the question ‘what is the meaning of life’ and I’m afraid I don’t have the answer. But are we so sure we know what life is, so sure that we feel more confident about it than a chess computer knowing the abstract notion of chess as a game? If we are ignorant to the complexities of this question beyond our personal scope how do we hope to achieve these world views that shape our political aspirations, especially when confronted with the alternative wills of our political opponents.

Politics has much in common with a single philosophical fork. Long has there been debates between the merits of determinism and free will, just as there has been with conservatism and liberalism.

One group favours the view that people are born in to circumstances that largely determine their choices and existence. We would be fundamentally responsible for assisting each other, overcome the negativity associated with these disadvantages. Each person is inexorably linked to each other.

We do our best. when you pit two chess computers against each other due to randomisation algorithms you can still expect results to go either way, and so it is with humans. Results will go for and against you and its always the response that is the defining factor. Randomisation is rarely taken in to account in real life. The culture we live in is very blame orientated, news outlets constantly fail to take in to account the things that are not in peoples control and then hold a grudge for the privilege.

One further crucial moment of the testing of Ava was an emotional one. The question was not will Ava feel any emotions but rather will the tester end up feeling anything toward Ava. This emotional response toward each other is probably the fundamental characteristic of humanity. The expression of our emotions, through empathy, art, relationships and even politics is a building block unique to life. This is the aspect of humanity we need to start recognising and embracing if we are going pass our own Turing Test.